“This Work must not be considered any part of the one bearing the same title, published by the Author in the year 1864.”

TO THE REV. GERALD MOULTRIE, M.A., EXETER COLLEGE, OXFORD, CHAPLAIN TO THE DONATIVE OF BARROW GURNEY.

MY Rev. and dear friend: Had I not offered to dedicate this series of designs for Memorials for Churchyards and Cemeteries to you, you might have complained of my want of gratitude, since you have with your own pen so admirably assisted me to make our “churchyards become books of instruction, and every gravestone a leaf of edification.” This has been, and I feel will be, one of your highest aims.

The figures have been sculptured by Mr. Forsyth of Worcester, and the foliage and other carving by Mr. W. Stevens of Barnwell, near Oundle. They are all very creditable work. [The Illustrated London News, No. 1291 Vol. XLV, 10.12.1864] 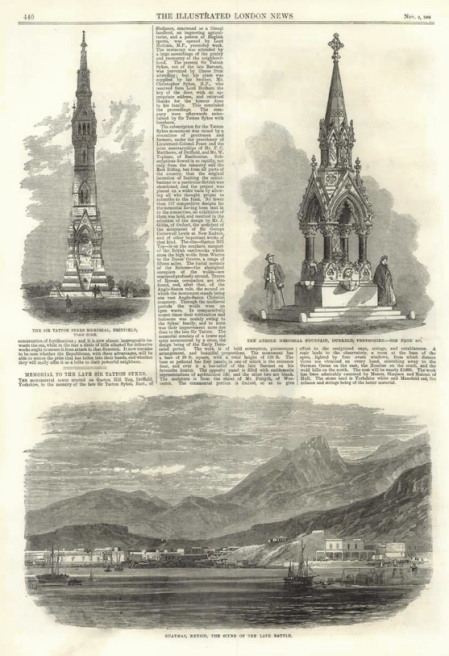 MEMORIAL OF THE LATE SIR TATTON SYKES. Preparations are being made to have the first stone of this memorial set during the present month. … The chief stage is devoted to sculpture, in which will be represented characteristically the late baronet. Coats of arms, various devices, and sundry pieces of foliage in caps, cornices… [Maidstone Telegraph]. LOCAL INTELLIGENCE. MEMORIAL TO THE LATE SIR TATTON SYKES. – On Wednesday afternoon Lord Hotham laid the foundation stone to the memorial to the late Sir Tatton Sykes… Mr. John Gibbs, of Oxford, was selected from a hundred and fifty competitors as the architect. The sculptured figures have been entrusted to Mr. Forsyth, of this city. [Worcestershire Chronicle]

Gibbs’ design for a ‘lofty square tower, or observatory, in the pure Gothic style’ with ‘sculptured figures … modelled by Mr. Forsyth, the celebrated sculptor, of Worcester’ was selected from amongst the 157 entries… Lord Hotham laid the foundation stone on the 17th May 1865. Unfortunately, the sculptor was unforgivably slow. Of the four panels originally commissioned, only two were completed for the inaugural ceremony in November 1866.