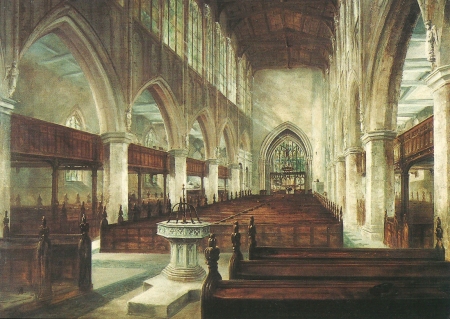 For Stratford Church there are oak brackets for the organ–case, beautifully carved in foliage, and angels playing on instruments. [Worcester Herald]

SCULPTURE. A series of beautiful bench–ends has just been completed by Mr Forsyth, of the Tything, in this city for Stratford Church, the choir of which edifice is about to be rearranged. The bench–ends are of oak beautifully carved on both sides with the foliage of ivy, oak, vines, marsh–mallows, chrysanthemums, etc, so that every bench varies from the others, and great taste and skill have been shown not only in the carving but in the contrasts produced. The Rev. Mr Moreton, curate of Stratford, and formerly of Wick, near this city, is promoting the improvements in the former church. [Worcester Herald / Worcestershire Chronicle]

In the church of the Holy Trinity, within which sacred enclosure repose the remains of what was mortal of William Shakespeare… …our clever fellow–citizen, Mr. Forsyth, of the Tything, was called in, his contribution being series beautiful wood–carvings, branch of art he has recently been applying himself to with perseverance and success. [Worcestershire Chronicle]

LOCAL NEWS. HOLY TRINITY CHURCH, STRATFORD–UPON–AVON. – The new stalls and seats for the choir, the handsome carved prayer desks and organ case…were designed by Mr. W. J. Hopkins, of this city; the carving being admirably executed by Mr. Forsyth, also of this city. [Worcestershire Chronicle]