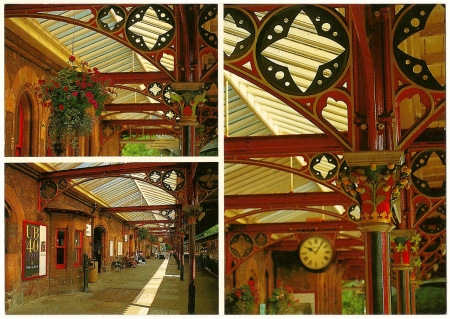 Image: GREAT MALVERN RAILWAY STATION is the most ornate small station in Britain and a listed building. Constructed of local stone, the oldest rock in England, it was built in 1863 by the Hereford and Worcester railway to impress the visitor to the Spa town which was famous for the Water Cure. Every platform pillar is decorated differently. Following an arson attack, British Rail has restored the buildings to their former colourful glory / Photographs by John Winsor © 1991 Winsor Fox Photos / Printed by Larkfield Printing Company limited, Brighouse, West Yorkshire.