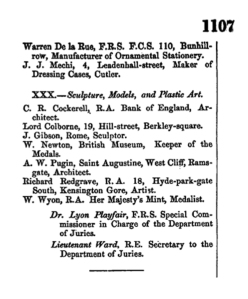 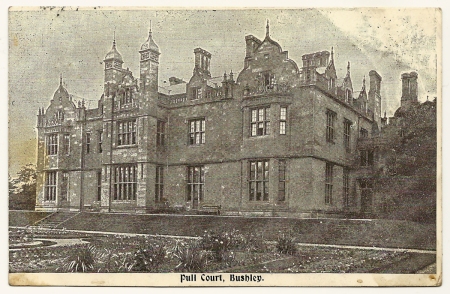 PULL COURT HARVEST HOME. Mr. G. Scott, of London, the eminent ecclesiastical architect, was accordingly instructed to prepare a design, and a chancel… the carving at the heads of the two capitals, from whence spring the arch, has been executed by the chisel of Forsyth, late of London, but now of St. John’s, in this city. [Worcester Journal] 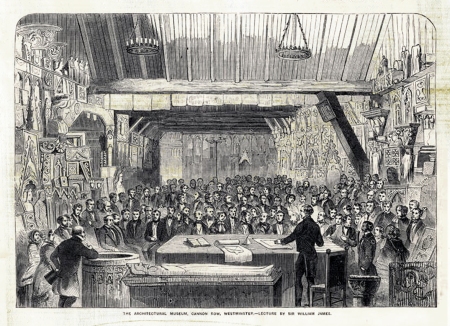 FOURTEENTH ANNUAL MEETING, MONDAY, JUNE 6, 1853. … “To turn for a short time to the losses Architecture has sustained during the past year. The hope expressed in our last Annual Report, that Mr. Pugin’s health might be restored to him, have proved vain, and in common with all lovers of medieval art, we have to regret the loss of one who, more than any other man, has contributed to promote sound taste and criticism… It is our duty, further, to thank him (George Gilbert Scott), in conjunction with Mr. Bruce Allen and others, for their endeavours to form an Architectural Museum and a School of Art for workmen. This is perhaps one of the most important undertakings of late years…”

On the evening of Wednesday week…Mr. George Gilbert Scott, the treasurer and secretary, read a very interesting report, wherein he recorded the origin and progress of the Museum. … Allied to it, and in intimate connection with our Museum, says the Report, is Mr. Bruce Allen’s School for Art for Architectural Workmen.

“…but it originated the architectural museum. I had a call, in consequence of my letter, from a strange person, Mr. Bruce Allen, who told me that he had long had a plan of the same kind in connexion with a school of art for art workman. After my return from Italy he pressed the matter, and invited to a meeting a number of architects, to whom he proposed his scheme, chiefly for the school of art. After several meetings, it was determined to establish an architectural museum, and to allow Mr. Allen to carry on his school of art as a private speculation of his own within the museum, to which he was to be curator.”

“The condition of the poor is, without doubt, unfriendly to mental culture and progress. … [and] exerts a most baneful influence on domestic affections. A family crowded into a single and narrow apartment, which is at once living room, kitchen, bedroom, nursery, and often hospital, must, without great firmness and self-respect, be wanting in neatness, order and comfort. The want of an orderly and comfortable home is among the chief evils of the poor.”

– Office of the Commissioners of Patents for Inventions, The London Gazette 11.12.1863 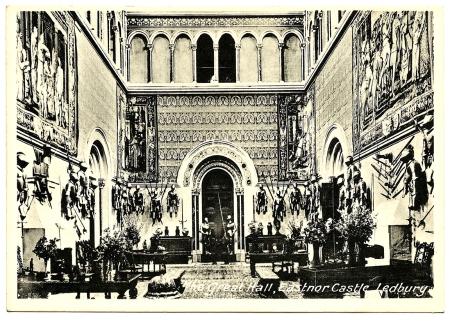 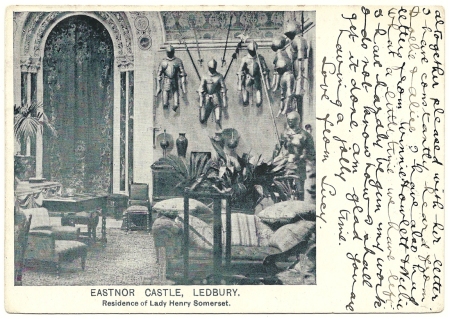 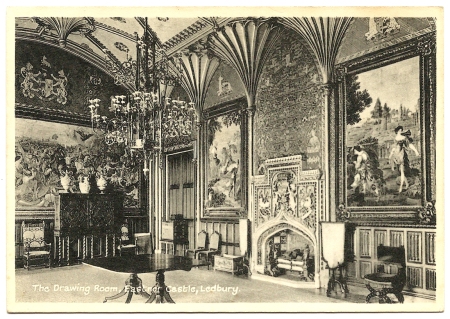 Image #2: Eastnor Castle, Ledbury. Residence of Lady Henry Somerset [sic] | Bow 11.30am Au 23 [08?] | My dear Minnie / I hope you are not dreadfully cross / for my not having written to you before. / Thank you very much for the long / & interesting letter I am very sorry / that I conveyed to you in my last / P.C that I was cross. I was not / in the least so but a trifle worried / & upset. Why do you mention Miss / Westerway in your letter to me? I / am not her satellite. I beg you / to understand, far from it. How / ever did it come about that / [] see has has gone with her to Paris, / it is the first I have heard / about it. I have, of course, heard / from my my daughter, I was not | altogether pleased with her letter. / I have constantly heard from / Dollie & Alice I have also had / letters from Winnie Howlett & Nellie / what a little time we have left / I have hardly begun my work / I do not know I shall / get it done. am glad you are / having a jolly time. / Love from Lucy.

Concert at Eastnor Castle…the beautifully carved capitals in the purest alabaster which are being chiselled in the best taste by Mr. Forsyth, of Worcester, and from designs by the noble Earl himself. We say being done, because the work which is one of great extent, has only just been commenced under the personal direction of the noble Earl. [Hereford Journal]